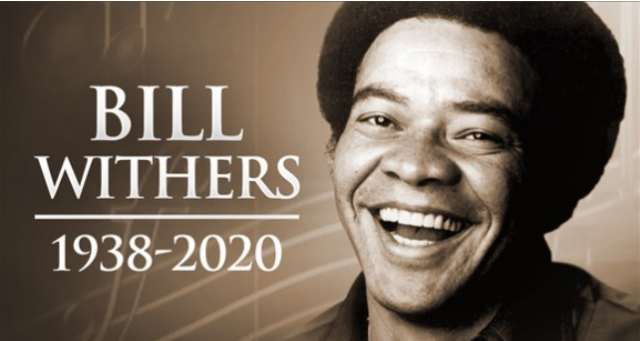 Iconic soul man BILL WITHERS died on Monday 30th March in Los Angeles. He was 81 and he’d been suffering with heart problems. Withers’ family issued the following statement: “We are devastated by the loss of our beloved, devoted husband and father. A solitary man with a heart driven to connect to the world at large, with his poetry and music, he spoke honestly to people and connected them to each other, As private a life as he lived close to intimate family and friends, his music forever belongs to the world. In this difficult time, we pray his music offers comfort and entertainment as fans hold tight to loved ones.”

Born in West Virginia, Withers took up music seriously after a stint in the US navy. In 1970 he signed to the Sussex label and his first album, ‘Just As I Am’, was an instant success using an unusual rootsy, laid back sonic template – one that appealed to soul, jazz, rock, pop and folk audiences alike. Other acclaimed and successful albums followed … ‘Still Bill’, ‘+Justment’, ‘Making Music’, ‘Naked and Warm’, ‘Menagerie’ and ‘’Bout Love’. Across those LPs were strewn a plethora of classic, timeless songs … like ‘Lovely Day’, ‘Hello Like Before’, ‘Grandma’s Hands’, ‘Lean On Me’,  Use Me’ and of course ‘Ain’t No Sunshine’.

After a dispute with Sussex Withers didn’t record for seven years except for guest appearances on Grover Washington’s ‘Just the Two of Us’ and Ralph McDonald’s ‘In the Name of Love.’ Then in 1985 he made a  “comeback” with the  ‘Watching You Watching Me’ LP.

Throughout his career Bill Withers was frustrated by the machinations of the music biz and after ‘Watching You Watching Me’ he effectively “retired”… touring just occasionally in the 90s but after that he was content to live “in retirement”.

In 2005 Withers was inducted into the Songwriters Hall of Fame and since then much of his catalogue has been reissued in various forms.  In 2015 he was inducted into the Rock and Roll Hall of Fame by Stevie Wonder. Withers  was amazed when he knew …. “I see it as an award of attrition. What few songs I wrote during my brief career, there ain’t a genre that somebody didn’t record them in. I’m not a virtuoso, but I was able to write songs that people could identify with. I don’t think I’ve done bad for a guy from Slab Fork, West Virginia” … typical understatement from a unique music talent.