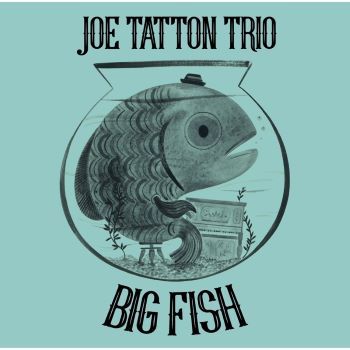 JOE TATTON is the keyboardist with the New Mastersounds – a long -standing Leeds based soul and funk outfit. He’s also played with the Haggis Horns and records in his own right with his eponymous “Trio”. In April that trio released a lovely little instrumental jaunt, ‘Stomp’.  The B side was the qually intriguing ‘Timeline’. This one was a piano/vocal work out in the manner of Mose Allison. We’ve since learned that Allison is a particular influence/hero of our Joe, so, no surprises that the new LP, ‘Big Fish’,  from the Joe Tatton Trio offers plenty more Allison flavours.

Indeed the only cover on the 12 tracker is of a Mose Allison tune. It’s ‘Ever Since The World Ended’ and the band treat it with the upmost respect and, given the pandemic and everything else that’s been going down, the lyrics are still hugely relevant!

The album title track (vocal from Aofe Hearty) is also redolent of Mose Allison. Indeed most of the music is. Things like ‘I Don’t Like Your Manners’ and ‘Is Anybody There’ combine the kind of jazzy melodies and ironic lyrics that Allison was renowned for. The opener, ‘Just Don’t Stop’ is maybe a tad faster than anything Allison attempted. Here the beats and the piano work might recall the Ransey Lewis Trio though this is a vocal.

Throughout the album, Mr T is aided an abetted by bassist Stevie Mackie and drummer Kenneth Blevins while some of the cuts  feature a full horn section.

‘Big Fish’ is out now via Rodina Music!