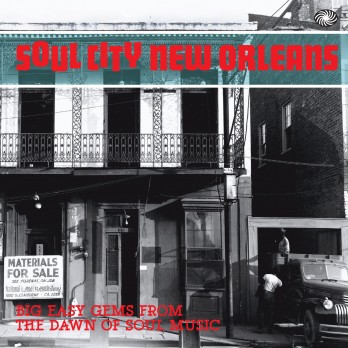 The Fantastic Voyage label’s archive soul survey blasts into New Orleans to bring us a mighty 2 CD, 60 track survey of early New Orleans soul. The city, of course, has a unique atmosphere and ambience. With its complex melting pot history and demographic, little wonder that New Orleans is often referred to as The Big Easy… and that easy way of doing things was sure felt in the way the city’s musicians made their music. The music of New Orleans has as an easy tempo… gentle and insistent; it features delicate rhythms often featuring a lazy, laid-back backbeat that gives the music a very distinct flavour… heard especially strongly in its soul output.

This new collection – ‘SOUL CITY NEW ORLEANS’ – looks at the soul made in the city in the late 50s and early 60s and features songs from the catalogues of labels like Minit, Ric, Instant and Bandy. The artists represent a great cross section of the city’s talent and they include big names like Lee Dorsey, Irma Thomas, Huey Smith, Bobby Marchan and Aaron Neville alongside lesser luminaries like Roy Brown, Joe Jones, Earl King and Elton Anderson. There’s also music from Eddie Bo, Ernie K Doe and Prince La La – three musicians who really do sum up the irrepressible spirit of New Orleans soul .

The album comes complete with a full colour booklet that’s been put together by veteran soul journalist Clive Richardson and his comments add to the enjoyment that’s to be had throughout the collection.