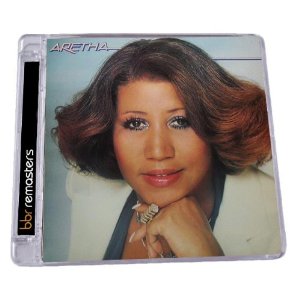 The bosses at bbr Records (Big Break records –a division of Cherry Red) show their impeccable tastes with a slew of fabulous soul reissues. Pride of place goes to ‘Get It Right’ from ARETHA FRANKLIN. The 1983 LP was The Queen Of Soul’s fourth Arista album and the second to be produced by LUTHER VANDROSS. The LP went to no. 4 on the R&B chart, to no. 36 on the pop chart and the infectious title song gave ARETHA yet another no. 1 R&B hit. But there’s much more to the album than that epic cut. For instance there’s a blistering reading of THE TEMPTATIONS’ ‘I Wish It Would Rain’ done in that special way that VANDROSS had with covers of familiar material… you know, the whole reconstruction thing. ‘Better Friends Than Lovers’ is a beautiful ballad, ‘I Got Your Love’ is a gentle, swaying dancer while ‘Giving In’ rivals almost anything from the Queen’s classic Atlantic period –checkout CISSY HOUSTON’S backgrounds too.

Equally collectable is an expanded edition of BILLY PAUL’S ‘Ebony Woman’. Originally a jazz singer, BILLY PAUL was there right at the start of the whole Philadelphia International thing and it was GAMBLE and HUFF who worked with him on the LP back in 1970. Essentially the album was a collection of BILLY’S unique and jazzy readings of well-known songs like ‘Mrs. Robinson’, ‘Everyday People’, ‘Windmills Of Your Mind’ and ‘Proud Mary’. Best and most accessible cut though is the lovely BOBBY MARTIN penned ballad ‘Let’s Fall In Love All Over Again’ which kind of points the way to BILLY’S epic ‘Me And Mrs Jones’. Incidentally, in the wake of that hit the ‘Ebony Woman’ album was re-released, but this is the first CD reissue to use the original art work.

Disco band G Q (“Good Quality”… if you don’t already know) are quite a different kettle of fish. Their second LP – imaginatively called ‘Two’ – has just won a reissue on bbr and though its stuffed with movers and groovers like the hit ‘Standing Ovation’, they are decidedly soulful movers and groovers and in RAHEIM LEBLANC the band possessed a great front man. He’s outstanding on the album’s big cover –a faithful rendition of BILLY STEWART’S ever wonderful ‘Sitting In The Park’. Unusually, G Q had a penchant for BILLY. Their first album boasted a cover of his ‘I Do Love You’ – which actually hit no. 20 on the Billboard pop charts. Q Q ‘Two’ was originally released on Arista in 1980 –enjoy it all again with the addition of a couple of bonus cuts.

Also currently available on bbr are reissues on THELMA JONES and TERRI WELLS. The JONES album is her eponymous 1978 Columbia LP helmed by BERT DECOTEAUX while the WELLS CD is her 1984 Philly World LP ‘Just Like Dreaming’. Big cut is, of course, her version of ‘I’ll Be Around’ but you’ll discover lots more super, Philly confections like ‘Can’t Stop’ and ‘Who’s That Stranger’. Find out more @ www.bigbreakrecords.co.uk