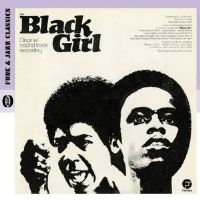 Ace Record’s BGP imprint has just launched a wonderful new series of classic funk reissues. It kicks off with the soundtrack to an obscure 1972 blaxploitation movie, ‘Black Girl’. The movie bombed at the box office (possibly, ‘cos it was based on a stage play, it just didn’t have enough action) but the soundtrack – featuring people like BETTY EVERETT, RODGER COLLINS and SONNY STITT has long been a collectors’ item. Other albums in the new series include the DONALD BYRD-produced ‘Vibes Of Truth’ from The 3 Pieces, ESTHER MARROW’S ‘Sister Woman’ (which includes a quirky version of ‘Rainy Night In Georgia’), LETTA MBULU’S Afro-soul classic, ‘Naturally’ and PLEASURE’S ‘Joyous’ – produced , of course, by WAYNE HENDERSON… more details on www.acerecords.com