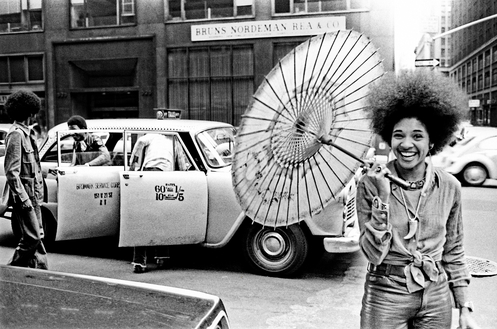 The announcement yesterday of the death of the cult funk singer Betty Davis – whom Miles Davis once described as “Madonna before Madonna, Prince before Prince” – marked the passing of a true music pioneer; a courageous, ahead-of-her-time artist who was unafraid of taking creative risks and crossing boundaries – even if ultimately, it harmed her career.

Davis’ whole aesthetic as well as her approach to life is best summed up by the title song of her 1974 album “They Say I’m Different.” She possessed a distinct “otherness” and was indisputably different; a woman who didn’t look and sound like anyone else when she launched her career as a singer/songwriter in the early 1970s. But the raw, in-your-face sexuality she exuded on the three albums she released between 1973 and 1975 combined with the wild raunchiness of her stage performances ignited controversy in her native USA; she was condemned by conservative religious groups and the influential NAACP, whose moral outrage resulted in Davis being treated like a pariah; they pressurized radio stations to boycott her records and persuaded TV channels not to give her airtime. The critics of the day, too, were often hard on Davis’s music, many saying that there wasn’t much of value behind the outrageous stage persona; that Betty Davis was a triumph of style and image over substance. It’s no wonder, perhaps, that a dejected Davis quit the music business in 1979, retreating to Homestead, a small city near Pittsburgh, Pennsylvania, where she lived in quiet obscurity.

But time has been kind to Betty Davis; as the years have passed, attitudes to her music have changed for the better. Reissues of her key albums by the US label Light In The Attic in the 21st century helped her raw funk grooves with their declamatory vocals and provocative lyrics find a new audience, resulting in a more positive revaluation of her artistic worth. Now, Davis is seen as the forerunner of Grace Jones, Madonna and Janet Jackson; female artists who used their sexuality as a weapon and created music via an uncompromising artistic vision.

Betty Davis was born Betty Mabry in Durham, North Carolina, in 1944, and influenced by the blues records she heard at her grandmother’s house, wrote her first song at 12. She then moved with her family to Pittsburgh and at 16, left for New York City where she studied at the Fashion Institute Of Technology; and from there became a model, appearing in publications like Glamour, Seventeen and Ebony. An aspiring musician, she also began her recording career, cutting her first single (‘Get Ready For Betty’) in 1964 when she was nineteen for Sinatra arranger Don Costa’s DCP International label; she also recorded a duet with Roy Arlington (as Betty and Roy) called ‘I’ll Be There’ for the indie label Sacrifice but neither record could make a commercial breakthrough.

By the second half of the ’60s, when the counterculture movement was gaining momentum, Betty was hanging out with Jimi Hendrix and after writing a song for The Chambers Brothers (‘Uptown (To Harlem)’) she was taken under South African trumpeter Hugh Masekela’s wing and recorded a one-off single for Columbia with him producing though it wasn’t a hit. The same year – 1968 – Betty met Miles Davis and the two began dating; their whirlwind romance led to the couple’s marriage in September 1969 but their relationship was a volatile one and a year later they were separated (though Betty would keep Miles’ surname). While she was with Miles, she appeared on the front cover of his LP ‘Filles Of Kilimanjaro,’ which included the tune ‘Mademoiselle Mabry’; Betty also influenced the trumpet icon’s fashion sense and crucially, introduced him to the music of Jimi Hendrix and Sly Stone, whose influence shaped Davis’ sound in the late ’60s and early ’70s. She also cut some demos for Columbia with Miles producing but they were shelved and only released in 2016 as ‘The Columbia Years 1968-1969.’

After her split from Davis, Betty was offered a songwriting contract by Motown but because of its unfavourable terms,  turned it down and moved to London in 1971 to further her modelling career; there, she met Marc Bolan of T. Rex fame, who urged her to write her own songs. Betty then returned to the US where she focused on pursuing a music career. She got a deal with Just Sunshine Records and released her self-written eponymous debut LP in 1973; a hard-hitting cache of churning heavy rock-inflected funk defined by snarling vocals and swaggering grooves. The album, which Betty produced herself, made the Billboard R&B albums chart in the States and was followed by ‘They Say I’m Different’ in 1974, which built on the funk-rock foundations of her first album. A year later, Betty signed to Island Records, which yielded the LP, ‘Nasty Gal’ a pugnacious platter that confirmed the NAACP’s worst fears about Betty Davis; that she was mad, bad and dangerous to know.

The flak she received after ‘Nasty Gal,’ whose eroticism some found shocking, along with the album’s commercial failure, took the wind out of Betty’s sails; she did go back in the studio in 1979, but her efforts came to nought. After that, Betty Davis dropped off the radar but through Light Of The Attic’s reissues and a 2017 documentary called Betty Davis – They Say I’m Different, her music continued to fascinate the public. Among the new generation of artists, she inspired was Janelle Monae, who says she’s indebted to the late singer; Monae described Betty as “one of the godmothers of redefining how Black women in music can be viewed she’s opened up a lot of doors for artists like myself.”

Betty Davis passed from natural causes at 4.40 am EST on February 9th at her home in Homestead, Pennsylvania. She was 77. We’ll leave the final words on her to her long-time friend, Connie Portis, who disclosed the singer’s passing yesterday: “It is with great sadness that I share the news of the passing of Betty Davis, a multi-talented music influencer and pioneer rock star, singer, songwriter, and fashion icon. Most of all, Betty was a friend, aunt, niece, and beloved member of her community of Homestead, Pennsylvania, and of the worldwide community of friends and fans. At a time to be announced, we will pay tribute to her beautiful, bold, and brash persona. Today we cherish her memory as the sweet, thoughtful, and reflective person she was…There is no other.”