BETTER THINGS TO DO…. 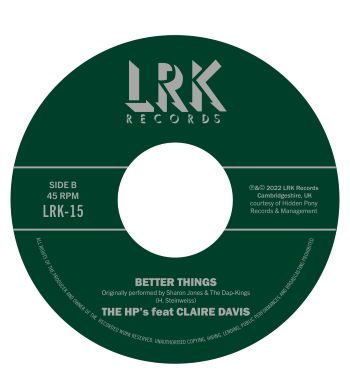 Latest release from LRK RECORDS is an intriguing 7” that pairs a track that was  released digitally earlier this year alongside a Sharon Jones tribute.

The band on the disc are the H.P.s  who are from Hamilton, Canada. Marshalled by drummer “Parkside” Mike Renaud, they peddle  old school funk and soul à la James Brown and Sharon Jones. Hear their take on the genre on the disc’s official A side – ‘Hope To See You Again’. It’s rugged and authentic  and features a big vocal from Canadian soulstress Claire Davis (you may remember her 2021 LRK outing, ‘Thrive’). The track might sound familiar as it was digitally released back in March.

The record’s B side is maybe more interesting – a cover of Sharon Jones’ ‘Better Things’ . A raw and jaunty take  with Ms Davis out front again, it’s a heartfelt and honest tribute to the late great funk diva.

We believe that both tracks are from the H.P.s’ upcoming album,  ‘Gritty City Soul, Vol. 1’  (“Gritty City” being Hamilton’s nickname). ‘Better Things’ is coming out digitally 15th July and it will be on a limited  edition 45 vinyl. The Pre-Orders for the vinyl will be starting soon. Find out more  @  https://lrkrecords.bandcamp.com/