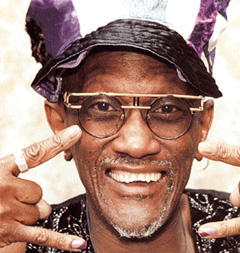 BERNIE WORRELL – keyboard player with the various Funkadelic/Parliament collectives – died on Friday 24th June in Bellingham, Washington. He was 72 and he’d been suffering from lung and prostate cancer for some time. His passing was announced on his Facebook page: “At 11:54, June 24, 2016, Bernie transitioned Home to The Great Spirit. Rest in peace, my love — you definitely made the world a better place. Till we meet again, vaya con Dios.”.

Born in New Jersey, Worrell was something of a child prodigy, playing piano aged just 3 before going on to study at the renowned Juilliard Conservatory of Music. One of his earliest pro gigs was working with the Tavares brothers when they were known as Chubby and the Turnpikes. However after a meeting with George Clinton, Bernie was drafted into the Parliament team. Working within the whole Parliament/Funkadelic/Parlet/ Brides Of Funksentstein/Bootsy’s Rubber Band aggregations, Worrell played grand piano, Wurlitzer electric piano, Hohner Clavinet, Hammond B3 organ, ARP String Ensemble and Moog synthesizer in his own, often idiosyncratic way.

Bernie released his own solo album, ‘All The Woo In The World’ in 1978, then in the 80s he went onto work with Talking Heads and Fela Kuti. More recently Bernie worked with ex Parliament guitarist DeWayne ‘Blackbyrd’ McKnight and performed with his own group, the Bernie Worrell Orchestra. He also appeared in the movie ‘Ricki and the Flash’.

An inductee in the Rock And Roll Hall Of Fame, Bernie Worrell will be remembered as a true innovator, a pioneer in bringing electronics into soul and funk music.