BENSON’S BACK WITH GREATEST HITS PACKAGE 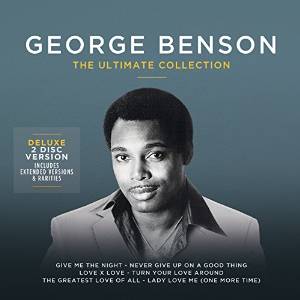 Guitar great, the legendary GEORGE BENSON, has his long and glittering career chronicled by a new anthology titled ‘The Ultimate Collection,’ which is issued by Rhino on March 2nd this year.

The 17-song set contains some of the Pittsburgh-born fretboard maestro’s best loved work, including the classics ‘Breezin,’ ‘This Masquerade,’ ‘Give Me The Night,’ ‘Love Ballad,’ and ‘Lady Love Me (One More Time).’

A deluxe 2-CD/36-track  version will also be available, which will feature some rarer cuts as well as duets with Patti Austin, Jill Scott, Idina Menzel, Aretha Franklin. Included, too, is the long version of ‘Love Will Come Again,’ a duet with Chaka Khan from 1983 that has never been on CD before (it was originally released on cassette)

‘THE ULTIMATE COLLECTION’ is released on March 2nd.