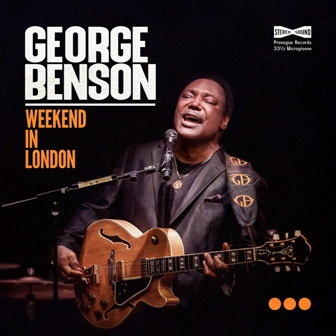 It may seem a long way away, but come November 13th, GRAMMY-winning, GEORGE BENSON will release a new album …..’WEEKEND IN LONDON,’ a new live album capturing his 2019 performance at London’s intimate Ronnie Scott’s Jazz Club. The title, obviously, is a reference to the jazz man’s classic ‘Weekend In LA’.

For his set that night Benson played many fan favourites…. ‘Give Me The Night’, ‘Love X Love’ and ‘In Your Eyes’ amongst them. He also offered ‘I Hear You Knocking” and Donny Hathaway’s ‘The Ghetto’ which is the first single. George explains: “We don’t plan the show out in advance. But we know there’s things we gotta play, and if you leave too many out, you’re in for a troubled night. We know what people have come to hear. So I’ve got half the battle won.”