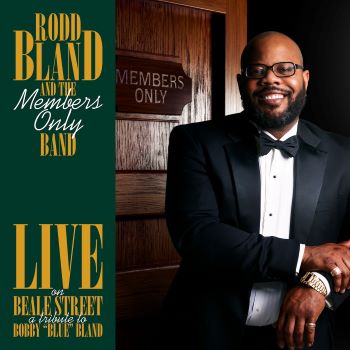 Memphis drummer RODD BLAND is the son of blues and soul legend, BOBBY BLAND and, with his band, he tirelessly works to keep his father’s heritage up there in the spotlight. Tribute shows and recordings ensure that a new generation will have the opportunity to enjoy the legacy of the man dubbed “the Lion of the Blues”.

In May 2019 Rodd and his band played a barnstorming tribute show at B.B. King‘s Blues Club in Memphis, which sits at the corner of Second and Beale, serving as the gateway to that city’s  historic entertainment district. The live recording of that concert has just won release on Nola Blue Records and the mini album (just 6 tracks) is indeed a fine tribute to the memory of Bobby “Blue” Bland.

The repertoire is short but intriguing, with Bland Jr. selecting lesser known songs from his father’s back catalogue. Perhaps the most famous song on the album is a version of ‘St James Infirmary’ (always a Bobby Bland mainstay). The other songs are ‘Up And Down World’, ‘Sittin’ On A Poor Man’s Throne’, ‘Soon As The Weather Breaks’, ‘I Wouldn’t Treat A Dog (The Way You Treated Me)’ and Bobby’s Malaco-era funk anthem, ‘Get Your Money Where You Spend Your Time’.

The band for the show was Jackie Clark on bass, Harold Smith on guitar, Chris Stephenson on keyboards and vocals and the horn section of trumpeters Marc Franklin and Scott Thompson, with Kirk Smothers on saxophone, along with vocalists Jerome Chism and Ashton Riker, all of whom worked for Bobby at some point in their career. Rodd’s fierce drumming drives the show forward while the vocalists deliver exactly what’s needed without trying  too hard to impersonate the great man. In short, it’s a convincing performance  that echoes Bobby own live Beale Street recording from 1998. Indeed three of the songs are the same but what is most gratifying is that great music like this is still being made!