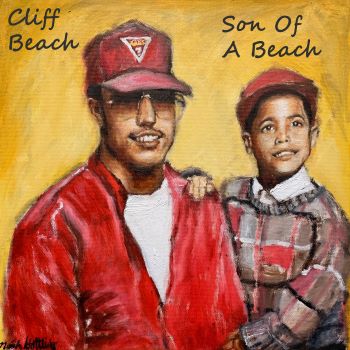 Trained at Berklee College, CLIFF BEACH is a Washington DC- born indie soul and gospel singer/songwriter.  He debuted in 2013 with the imaginatively titled EP, ‘Who The Funk Is Cliff Beach?’ and his latest offering, another EP, boasts a title with more clever wordplay, ‘Son Of A Beach’.

The mini-album offers five long tracks (the shortest clocks in at just over five and half minutes!), with one song, ‘Wildflower’ coming in two versions, a “band” version and a “strings” version. The song itself is something of an introspective meander with not a lot to choose between the two mixes. Introspection seems to be the order of the day for the rest of the material too. Most striking cut is ‘The Truth’ which features input from Mestizo Beat. The other cuts are the opener, a gospel-flavoured ‘I Got Soul’ and ‘So Into You’ which channels a Southern soul feel.  Cliff calls his music “Nu-Funk” – it’s not classic funk à la James Brown et al but there is a funk undertow throughout. ‘Son Of A Beach’ is released June 24th.