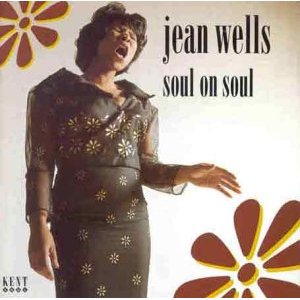 bbe Records (Barely Breaking Even) have just released their autumn offerings … four varied and enigmatic albums, of which the clear standout is a wonderful retrospective on soul diva JEAN WELLS. Rightly titled ‘SOUL ON SOUL’, the 24 tracker is an almighty sweep through the Florida-born soulstress’ back catalogue. With sleeve notes by the redoubtable DEAN RUDLAND, the album features classics like ‘Have A Little Mercy’, ‘If You Ever Loved Somebody’, ‘What Have I Got To Lose’ and ‘After Loving You’ . This new release is essentially a re-run of Kent’s 1994 long-deleted CD on JEAN but as a bonus here we get three previously unreleased tracks. Listening, it easy to hear why JEAN’S work was  championed by key soul taste makers like DAVE GODIN and more recently  by RALPH TEE. There’ll be a full review of this epic, must-have, proper soul release on SJF very soon.

The second bbe release is very different but enigmatically intriguing; it’s ‘Deep Impressions’ from KATALYST. KATALYST is the alter ego of Aussie ASHLEY ANDERSON. ANDERSON made his earliest recordings using the MOONROCK name and he enjoyed some success when his music appeared on the famed Cafe Del Mar albums. In 2002 he debuted as KATALYST with ‘Manipulative Agent’ – an award winner down under. ‘Deep Impressions’ is his third full album and features input from people like STEPHANIE McKAY, MR CLEAN, JADE MACRAE, STEVE SPACEK, BOOTIE BROWN, BUFF 1 and THE COIN LOCKER KID who brings 21st century vibes to a version of SHIRLEY ELLIS’ ‘The Clapping Song’.

GIT’S ‘Imagination’ (the third of bbe’s new albums) is an experimental hip-hop set. The sounds have underground appeal and are built around electronic samples and heavy drum breaks, while the fourth new bbe set is even more futuristic. JULIEN DYNE’S ‘Glimpse’ comprises of 19 futuristic tracks which are heavy on layered harmonies and percussion.