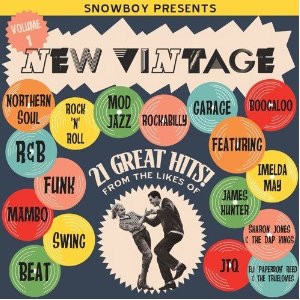 The small but perfectly formed Hastings-based indie label, bbe Records has just issued two superb compilations. First up there’s a SNOWBOY curated set – ‘New Vintage’ – a rockin’ 21 tracker stuffed with authentic R&B, mambo, swing, funk, soul and lots of other flavours. The album’s been released to tie in with the Vintage Festival – first held and organised by designer WAYNE HEMMINGWAY at Goodwood in 2010. The music on the collection is all current and contemporary though definitely retro flavoured. SNOWBOY however isn’t happy with the word “retro”. He says, “To me that say’s “A thing of the past””. He’s much happier with the word “vintage” which to him means “representative of the best and most typical“. Best maybe to forget the philological arguments and focus on the music and with contributions from the likes of SHARON JONES and the DAP KINGS, STEVE HOOKER, IMELDA MAY, ELI ‘PAPERBOY ‘REED, the vastly underrated JAMES HUNTER and SNOWBOY’S very own LATIN SECTION there’s lots to love.

bbe’s second set is eerily similar in flavour – but all the music on ‘Legendary Wild Rockers 2’ is actually from the 50s and 60s. The collection (as the title suggests) is the second is a series compiled by KEB DARGE and LITTLE EDITH and it collects together retro (or should that be vintage?) rockabilly, rough R&B and surf music from artist as exotic as THE SWANKS, THE SKEE BROTHERS, THE CATALINAS, BRIAN “LEGS” WALKER and his WALKING TALKING SAX and BOB VIDONE. It’s all hugely atmospheric and mightily enjoyable,…. “real music for real people” as the bbe strap line boats….find out more about both albums @ www.bbemusic.com