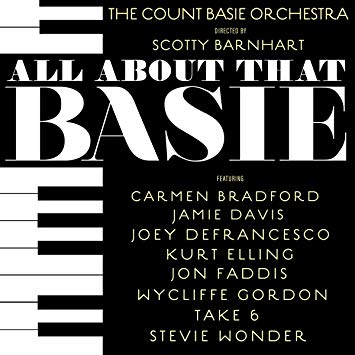 THE COUNT BASIE ORCHESTRA has been in business for over 80 years and it still packs a huge swinging punch. Now under the direction of Scotty Barnhart, the band has just released a new album….. ‘All About That Basie’ which celebrates the band’s history offering brand new recordings of music from the band’s earliest years right through to today.

Helping the orchestra deliver is a stellar guest list that includes Carmen Bradford, Jamie Davis, Joey DeFrancesco, Kurt Elling, John Faddis, Take 6 and a certain Stevie Wonder. Stevie adds unmistakable harmonica to a gorgeous, brassy treatment of his own ‘My Cherie Amour’. Take 6 , by the way, are featured on a swinging version of the Basie classic ‘Everyday I Have the Blues’.

Amongst the other featured cuts are ‘Don’t Worry ‘Bout Me’ with Kurt Elling on vocals and a soul-jazz reading of ‘April In Paris’ featuring Joey DeFrancesco’s Hammond. More contemporary material comes in the shape of Leonard Cohen’s ‘Hallelujah’ and Adele’s ‘Hello’. Soul fans will be pleased to see a nod to Earth Wind And Fire’. Their Skip Scarborough-penned ‘Can’t Hide Love’ is an album highlight.

Whatever the material, everything gets the full “Basie treatment”. Producer and former Basie drummer Gregg Field says: “Basie’s band throughout the years was able to successfully cover hits of the era with their sound and as part of the new album we have continued that tradition”.