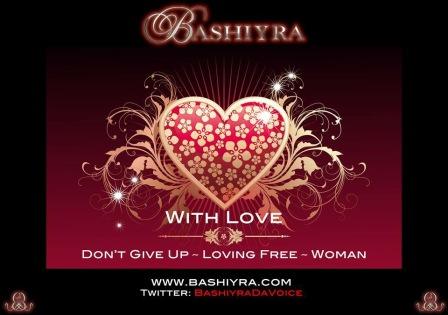 UK soul singer, BASHIYRA’S a busy girl. She’s an in-demand session singer (credits include work with Diana Ross and Patti Labelle) and she’s regularly on the road as a backing vocalist. She made her solo recording debut back in 2009 with the album ‘Thought You Knew’ and last year won lots of plaudits for her modern soul single ‘Just Can’t Be Wrong’. The B-side was tasty too – a cover of Phyllis Hyman’s ‘You Know How To Love me’.

Working for Herb Middleton’s Nu Vybe label, Bashyira’s almost ready to drop her sophomore LP. In the meantime, though, she’s maintaining interest with a new three track EP, ‘With Love’. Lead track is a steady mid-tempo item called ‘Loving Free’ while ‘Don’t Give Up’ offers more of those steady, stately beats. Final cut sees the resurrection of an old tune – ‘Woman’, which first surfaced last year. It’s another neat, clipped beater and though none of the three have that anthemic quality, they’re pleasing modern soul outings and any of them would sit nicely in a sophisticated DJ set.