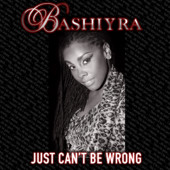 London-based soulstress BASHIYRA has been in the business since the 90s when she worked doing BVs for people like Michael Bolton, Patti Labelle and Diana Ross. 2009 saw the release of her debut, ‘Thought You Knew’, a mix of neo-soul, jazz and dance which won Bashiyra ‘The Soul Baby Live Award 2011’).

In 2013 she released an EP on Expansion Records (you may remember her lovely ‘One Shot At Love’) and is currently working on a new album for Herb Middleton’s Nu Vybe label. The long player is heralded by the single ‘Just Can’t Be Wrong’ which has just become available. The song is a steamy slab of down tempo soul which has a theme similar to Alicia Key’s ‘You Don’t Know My Name’. We’re told that there’s a Soul Talk remix on the way along with Bash’s version of ‘You Know How To Love Me’.