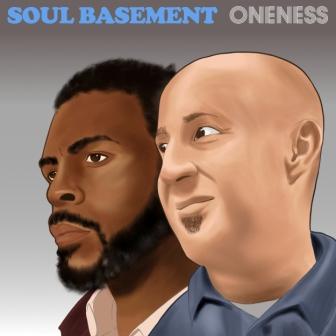 Back in 2016 we sang the praises of an Italian album from SOUL BASEMENT, ‘What We Leave Behind’. Now we weren’t the only soul media to single out the long player. Most of the serious soul press gave the long player a big thumbs up pointing to its mix of old school soul vibes, cool jazz flavours, gentle introspection and thoughtful, caring, lyrics.

Our research revealed the Soul basement is the creation of Italian musician/songwriter/producer FABIO PUGLISI and as “Soul Basement” he’s been making his infectious brand of modern soul since 1997 and the great news is that the Basement Boys have just released a new album – ‘Oneness’ – a cool 8 tracker that takes off where ‘We Leave Behind’ finished. Once again Fabio is joined by Houston born vocalist, Jay Nemor who comes on like a hybrid of Lou Rawls and Jon Lucien with a hint of Cunnie Williams thrown in….. quite a voice, rich, sonorous, engaging, passionate…. perfect for the messages in the music.

Without being too didactic, ‘Oneness’ carries a simple message (you’ve probably guessed that from the title!). Fabio says: “Most people today think of music as a way to have some temporary fun, but there’s way more to it than just mere pleasure. A good song can also make you reflect on the many aspects of life, of the world we live in, sometimes it can give you the reason that you’ve been missing, and in some cases even awaken you. We believe today, more than ever, there’s a need for a rediscovering of the true purpose of art, which is not showing off, but transcending the ego, and showcasing the hidden qualities of our human condition.” So ‘Oneness’ explores a whole raft of key issues… civil rights, human dignity, mutual respect, universal love; but nothing’s in your face – the music insinuates its messages and is the better for that.

There are no highlights amongst the eight cuts –each track has so much to offer in terms of musicality and message but right now we’re loving the songs that top and tail the album. The opener, ‘Better Days’ is a gorgeous, laid back affair, while the closing ‘Count On Me’ boasts a lovely, brassy arrangement. In between there’s lots more to love.

In a year, that’s already given us some splendid new soul music, we heartily commend this one to you!