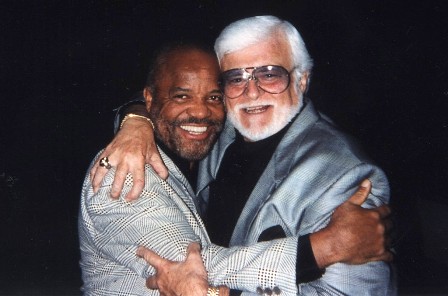 BARNEY ALES – a key figure in the history and evolution of Motown – died on Friday 17th April in Malibu, California. He was 85 and “natural causes” was given as the cause of death. The recent picture (above) shows Ales with Berry Gordy… the pair were close friends and business colleagues.

Of Italian descent (his father cane from Sicily), Ales was born in Detroit in 1934 and his first job was in the Dodge car factory. Aged 21 he quit to work for Capitol Records Detroit operation. Four years later he was appointed Detroit branch manager of Warner Brothers Records. In 1960 he met a young and ambitious Berry Gordy who appointed Ales as his sales and promotions director and right up 1972 he helped the company grow into a worldwide operation, Motown historians cite Ales’ unique sales skills and flair for promotion as one of the keys in the company’s surge… some suggest that his Sicilian background was also helpful! In 1969 Gordy appointed Ales executive VP and general manager of Motown but when the company relocated to Los Angeles, he quit, staying in Detroit and launching his own Prodigal Records. (amongst his signings was Ronnie McNeir).

In 1975 Ales rejoined Motown in LA, eventually becoming company president. He left again in 1979 to work with Elton John at Rocket Records. Ales also worked with the Penthouse and Pablo labels before retiring in the 1990s.

Ales is is survived by his wife Eileen, children Steven, Barney, Shelley, Brett and Cristina and nine grandchildren.