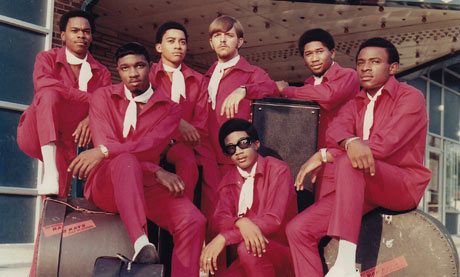 Memphis band The BAR-KAYS have been making music for fifty years. The band started life as an instrumental combo called the Imperials. Their love of Bacardi Rum and reverence for their heroes The Mar-Keys led to a name change and they were eventually signed to Stax where they became the label’s second studio band. Their first single in their own right – the so, so catchy ‘Soul Finger’- gave them a top 20 hit but tragedy struck when four members of the band perished in the Lake Monona plane crash that also took the life of Otis Redding.

Trumpeter Ben Cauley survived the crash and set about rebuilding the band and at first the sound of the “new” Bar-Kays was essentially the same – hard, driving, brassy old school southern soul. Collectors will know that the group were featured on Isaac Hayes’ monumental ‘Hot Buttered Soul’ album.

Then, in the early 70s –with the addition of a vocalist, the Bar-Kays began to change musical direction… moving towards a harder, funkier, rockier, psychedelic sound, typified by their album ‘Black Rock’ and with subtle shifts and the inevitable personnel changes that’s what the Bar-Kays still peddle.

Now, on December 4th the band will celebrate their 50th anniversary at Memphis’ Cook Convention Centre. The show will feature appearances from George Clinton, The Mary Jane Girls and Willie Clayton and there will also be a state of the art, animated, on-screen visual display from the Memphis based Prodigi Arts Group. We’re told that the presentation will allow the audience, “To see it (the band’s history) in a way that’s never been done before, reminding those fans who may have witnessed the Bar Kays perform long ago of what they saw in a completely re-imagined way. By utilizing a style like animation to create entire scenes and an engaging narrative for the on screen content, audiences will be able to engage with the history of the Bar Kays on a completely different level.”