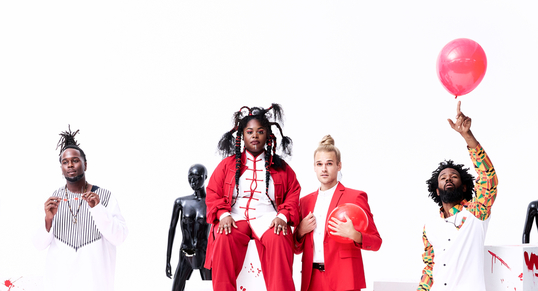 The Grammy-nominated US band TANK & THE BANGAS are set to release their new album ‘Red Balloon’ on Friday 13th May via the Verve Forecast label. As a taster for their forthcoming long-player, the band have just issued a single called ‘No ID,’ a captivating slice of disco-soul which is available now on all streaming and download platforms.

Based in New Orleans and fronted by the charismatic vocalist Tarriona “Tank” Ball, the quartet are renowned for their energetic live performances and  debuted in 2013 with the self-released album ‘Think Tank,’ following it up a year later with the live LP  ‘Big Bang Theory: Live At Gasa Gasa.’  In 2019, they inked a deal with major label Verve Forecast and issued the critically lauded album ‘Green Balloon,’ which garnered them a Grammy Award nomination. It also established the band’s dizzyingly eclectic sonic template, which melds elements from R&B, hip-hop, gospel, spoken-word music and jazz into an unclassifiable and unique sound.

Breathtakingly kaleidoscopic in its stylistic scope and also a little quirky,  ‘Red Balloon’ is the band’s fourth and most satisfying to date. Say the band: “This has been one of the best attempts thus far at capturing what happens when we’re all playing at the same time. ‘Red Balloon’ is coming straight for your heart and your neck. It’s going to make you bop and think and love, hopefully, and even love people that look different.”

‘No ID’ is out now while ‘Red Balloon’ is released on Friday, May 13th via Verve Forecast.