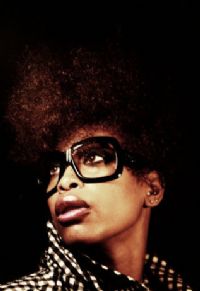 ERYKAH BADU will release her fifth studio album, ‘New Amerykah, Part II: Return of the Ankh’, on February 23, 2010. The new album is the singer’s follow-up to her critically acclaimed 2008 disc, ‘New Amerykah, Part I: 4th World War’. The LP features full live instrumentation and the music deals with romance and relationships rather than politics and social issues. One of the key cuts which gives the album that special romantic flavour is ‘Fall In Love’, featuring a sample from EDDIE KENDRICKS’ ‘Intimate Friends’. Guest producers and artists include 9TH WONDER, JAMES POYSER, BILAL, and the late J DILLA. “We used a lot of analog instruments—harps, strings, drums, piano, and even a Theremin—to give the album that sonic feel,” said BADU. “There’s a strong undercurrent of bottom, a rumbling to these songs that feels good to me. It feels like a hug.” Full review on www.soulandjazzandfunk.com very soon.