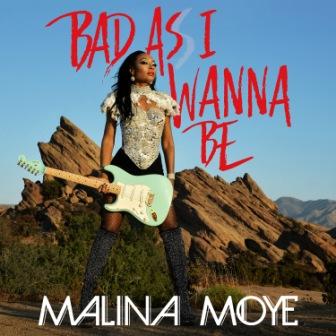 MALINA MOYE,  described by some commentaors as “a pop-rock maven and international guitar superstar”, debuted in 2011 with the album ‘Diamonds And Guitars’. Since the release she’s gone onto to work with the Hendrix Experience tour and opened for artists like Robin Thicke whilst cultivating her image as a musical bad girl.

March sees the release of her new album – ‘Bad As I Wanna Be’. It’s a 10 track set that sees Ms M let fly with fierce vocals and a fiercer Fender Strat guitar sound. The Hendrix influence is palpable… she even covers the master’s ‘If 6 Were 9’. The only cut to bother the soul crowd is possibly ‘K-Ytoic’ which features input from a certain Bootsy Collins. It is, though, as “chaotic” as the onomatopoeic title suggests.