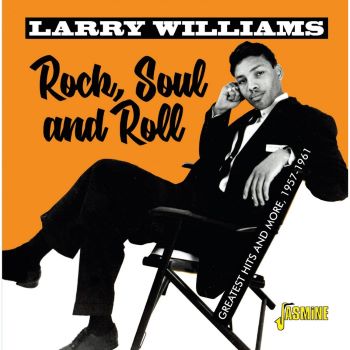 LARRY WILLIAMS (1935-1980) was a second division R&&/R&B/soul singer. Born down in New Orleans, he was also an accomplished songwriter, producer and pianist but major success eluded him – this, despite a string of timeless R&R hits and a clutch of in-demand soul sides. Commentators suggest this was down to a combination of record company chicanery and a chaotic personal life that was plagued by drug addiction and violent episodes.

A new 30 track collection from Jasmine Records will allow you to catch up on the first part of Williams’ career. It spans the years 1957-1961 when he was pacted first to Specialty and then to Chess. Specialty had been the label that saw Little Richard break out, and label owner Art Rupe, believing that you can never have too much of a good thing, saw Williams as another Little Richard. To have “another Richard” became more pressing when in ’57 Mr Penniman said he was quitting music for religion! So, where Richard had ‘Long Tall Sally’ and ‘Tutti Frutti’, Williams had ‘Short Fat Fannie’ and ‘Bony Moronie’ – those two and a lot more Williams songs all recorded in the frantic manner of Little Richard. Both those Williams’ songs have since become R&R “standards” as too have his ‘Slow Down’, ‘Dizzy Miss Lizzy’, ‘She Said Yeah’ and ‘Bad Boy’. Those who can remember the 60s will know those songs were all beat group staples with, especially, the Beatles and the Stones covering some of them.

Williams’ Specialty career came to an abrupt end in 1959 when he was jailed for possession of narcotics and firearms. After serving a couple of years in jail, he signed to Chess where his work (illustrated here by 10 tracks) was still very much R&R with a hint of embryonic soul (listen to ‘Fresh Out Of Tears’). In the mid-60s Williams was lured to Okeh Records by his old pal, Little Richard who’d made his first of many “musical comebacks” and Okeh tracks that Williams recorded with Johnny Guitar Watson became big Northern soul favourites.

By the 70s Larry Williams’ life was spiralling out of control. A lifetime’s drug abuse took its toll and things came to a head when in 1977 he threatened to shoot his onetime mentor, Little Richard. Terrified, Richard quit music again and Williams’ career continued to spin away as he became involved with drug gangs. In January 1980 he was found dead with a bullet hole in his head. The official verdict was suicide but Williams’ involvement with the drug cartels and organized prostitution suggests otherwise. Larry Williams died as he lived – making his 1959 hit ‘Bad Boy’ somewhat prophetic.