BACK WITH A BULLET 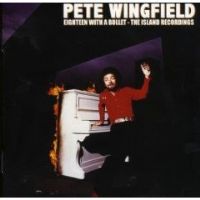 Readers with long memories may fondly remember PETE WINGFIELD’S 1975 hit ‘Eighteen With A Bullet’. WINGFIELD, a long-time soul fan who edited soul fanzines and wrote for ‘Let It Rock’ magazine, crafted the song as a tribute to his favourite group THE DELLS and the song’s wonderful intricacies ensured it was a hit not just in the UK but in the States where WINGFIELD was taken for a black artist. ‘Breakfast Special’, the Island album that spawned the hit, has long been deleted, but, thanks to Cherry Red, it’s now back on the racks enhanced with the rest of super-sessioner WINGFIELD’S other Island recordings. ‘Eighteen’ is still outstanding, but as noteworthy are two fine ballads – ‘Number One Priority’ and ‘That’s How Chances Go Round’ which are reminiscent of BLOODSTONE, a band whose sessions WINGFIELD worked on. Collectors will also need to know that the CD features ‘Scratchy 45s’ – WINGFIELD’S tribute to the real R&B stars of New Orleans, where the song has become something of a cult classic.

Tags: BACK WITH A BULLET