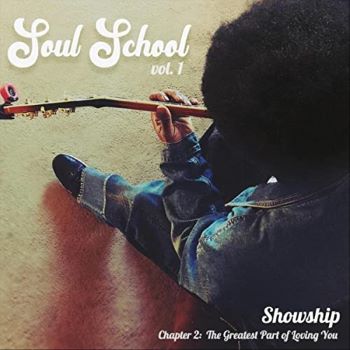 Adell Shavers is a soul/jazz guitarist who works with a band called SHOWSHIP (once known as Straight Jacket). Showship has just launched their debut album ‘Soul School Volume 1’ . Mr S says that the  11-track album  is “the beginning of a voyage into the different types of R&B and Jazz featuring old school artists as well as new and upcoming artists “

Right now the LP’s two focus tracks show that Showship totally understand how to meld old school with the new! First up there’s a tight, feisty soul dancer, ‘The Greatest Part Of Loving You’​. The song was originally a Straight Jacket track, but we believe that this Showship version is a new recording. With a proper soul vocal from Beth Griffith and some rockin’ Junior Walker sax work from maestro Dave McMurray, the cut is infectious and just  right to get those summer parties started. ‘Baby Shower’ is a whole lot more gentle. Here the singer is Sasha Mari and Showship says that the song “is all about love, life and it’s all about giving”. Ms Mari’s sweet vocal perfectly matches the sentiment.

The album’s other tracks include ‘Catherine Thinking’ – a homage to the guitarist’s mother and the sensual ‘Dust Till Dawn’. Summing up, Adell says of the album: “You are opening up a book that is a collection of songs influenced by my upbringing in Detroit. It’s the evolution of the Motown Sound. As you know, there are different types of R&B. This is a glimpse of mine”.

SHOWSHIP’S ‘Soul School Volume 1’ is out now on Showship Records.