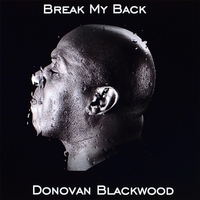 DONOVAN BLACKWOOD is a UK soul man whose sound and style has drawn comparison with people like Seal, Sean Escoffery, and Terence Trent D’Arby. For a while now he’s been working with Heatwave and he’s also provided BVs for Lionel Richie, Tina Turner and James Morrison.

More recently he joined the The British Collective on their acclaimed ‘The Renaissance Begins’ album. On the track, ‘Won’t You Come Over’, he joined Roachford, Don-e, Noel McKoy, Errol Reid, Sinclair and Junior Giscombe on lead vocals.

Now, in his own right, Donovan has just released his own 5 track EP, ‘Break My Back’. The immediate attention-grabbing track is the urgent, up-tempo ‘Never Going To Let You Go’. It’s ultra catchy and not a million miles away from the signature sound of that aforementioned British Collective album. Speaking of which, one of the Collective crew, Junior Giscombe, joins Donovan on the gentle ‘We Had Moments’ track on the EP…..

DONOVAN BLACKWOOD’S ‘Break My Back’ EP is out now.