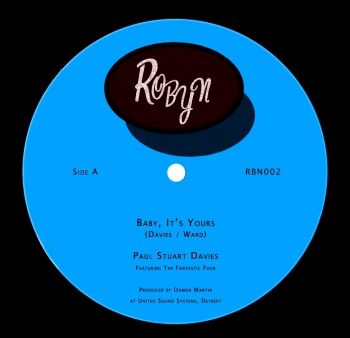 Those of you with decent memories might well recall a tasty Northern flavoured 7” single from PAUL STUART DAVIES – ‘Baby, It’s Yours’. The track was released in 2017 and it represented a sort of culmination of Northern soul fanatic Paul’s desire to deliver authentic 60s  soul

We were told that the cut’s backing track was a long-lost Motown out take. It certainly sounded like one but equally important was the fact that young Paul managed to get the  then current line-up of the Fantastic Four to  sings BVs on the pacey, typically mid 60s sounding dancer.

If you missed the track first time round we believe that  ‘Baby, It’s Yours’ is now available digitally  and your usual portal should  be able to sort you out!