B B KING RE-VISITED… 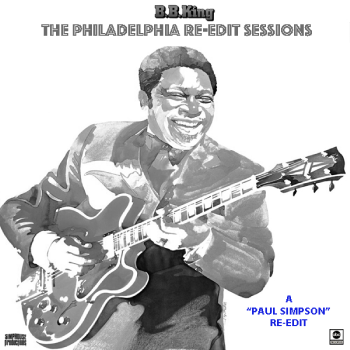 Throughout most of this year US master mixer PAUL SIMPSON has been working on classic material from a series of soul artists who had the privilege to record in Philadelphia. So far, he’s re-tooled Philly sounds from artists like Archie Bell and the Drells, the Tymes, the Manhattans, the Dells and more. However, Paul is keel to stress  that he’s not actually “re-mixing” the music; rather he’s “re-editing” it . After all what’s the point in radically  changing something that’s pretty damn good to start off with?

Latest artist to get the Paul Simpson “treatment” is B B KING – a rather surprising choice maybe. Remember, though, that the “Blues Boy” recorded a couple of albums in the City of Brotherly Love. They were 1973’s ‘To Know You Is To Love You’ and ‘Friends’ from the following year. Both were recorded at Sigma with Dave Crawford in the producer’s chair and the combination of King’s biting blues, Crawford’s’ southern soul sensitivities and the MFSB band (augmented by people like Stevie Wonder and the Memphis horns) produced some scintillating music.

Paul Simpson has chosen nine of the songs from those albums to re-edit and he treats ‘em all with the utmost respect. Like maestro Tom Moulton, Simpson works simply – highlighting the hooks and extending the breaks as required while always allowing the artist to hold centre stage.

Highlights amongst the nine tracks are ‘Friends’, a cover of Barbara Lewis’ ‘Baby I’m Your’ and a take on the Staple Singers’ ‘Respect Yourself’.

The music is a must for proper, old school  soul folk – but be careful! The music is only available via BANDCAMP and only available  for a limited period. Like all Simpson’s previous re-edits, they’re only around for a few weeks. Indeed  the B B edits will disappear on August 2nd! Get ‘em while you can!

Thanks to Mark Turner @ Soul Strutter for unearthing these gems. Learn more @ https://soulstrutter.blogspot.com/

Tags: B B King