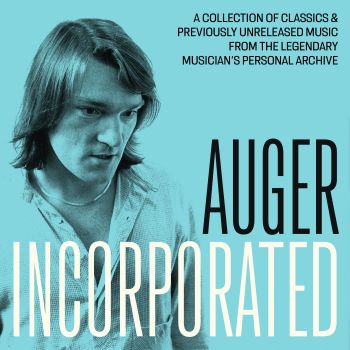 ‘Auger Incorporated’  is the title of a splendid new retrospective on UK keyboard maestro, BRIAN AUGER. Released by Soul Bank Music, the 26 tracker covers most of the bases in Auger’s illustrious career, but this is much more than a career-spanning anthology. You see, most of the tracks have come from Brian’s personal archive and there are 7 previously unreleased cuts. Soul Bank’s Greg Boraman says: “This is a once in a lifetime opportunity to fully re-issue nearly everything Brian has released, but to also finally unleash the vast number of musical gems from Brian’s own archive that have never been heard before, including live concerts and radio sessions, collaborative projects with equally legendary artists, alternate versions and out-takes – it’s a goldmine of sounds from across his entire 60-year career”.

‘Auger Incorporated’   begins with Brian’s epic 9 minute version of Horace Silver’s ‘The Preacher’ and ends with Auger’s own ‘Freddie’s Flight’ which first appeared on his 2007 album, ‘Looking in the Eye Of The World’. In between there are all kinds of everything –  including a collaboration with blues icon Sonny Boy Williamson ( the track is ‘Walking’ which also features a young Jimmy Page on guitar) and a dalliance with an ambitious young singer called Rod Stewart (‘I Just Got Some’). The Stewart recording dates to the early 60s when Rod “The Mod” was part of the London blues and soul scene and from that era, this album also boasts a wonderful ‘Up Above My Head’ (Long John Baldry on lead vocals  with Stewart on bvs) and a swinging cover of Oscar Brown’s ‘Jeanine’ with Julie Driscol at the mic. Driscol and Auger, of course, went on to enjoy a long and fruitful professional relationship which yielded the hit ‘Wheels On Fire’ (also included).

Other highlights include covers of Booker T and the MGs’ ‘Red Beans And Rice’, Aretha’s ‘Save Me’ and Lee Morgan’s ‘The Sidewinder’.