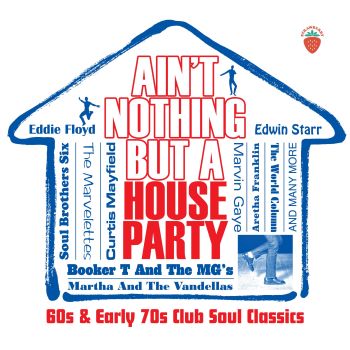 Someone once said that there’s no future in nostalgia! However, judging by the ever growing number of reissues and archive compilations there’s certainly plenty of milage in recycling classic music. Does this say something about the quality of new music; does it speak volumes about the quality of the oldies; or does it say something about listeners/collectors’ desire to relive the emotions and memories  of some perceived golden age? I guess it’s a mixture of all three and a bit more besides. So, now adding  to the “ever growing number of reissues and archive compilations” we’d like to commend a new 3CD, 89 track compilation from Cherry Red’s Strawberry subsidiary.

‘AIN’T NOTHING BUT A HOUSE PARTY’ is an ab fab collection of 60s and early 70s soul, what the clever compliers call ‘Club Soul Classics’ . The music is the  music of the  UK mod scene. The era when the mohair besuited boys and girls danced the night away in the cellar clubs of the UK’s major cities and afterwards went out on a mission to find and collect the sounds the savvy DJs had played out to them.

Top of the in-demand lists were the sounds of Motown, Chess, Stax and Atlantic and this collection is stuffed with plenty of cuts from those venerated labels. So enjoy things like the Temptations’ ‘Girl Why You Wanna Make Me Blue’ (was there ever a better, more joyous Motown intro?), Tony Clarke’s ‘Landslide, the Astors’ totally bonkers ‘Candy’ and Otis Redding’s ‘Hard To Handle’. Plenty more labels are represented of course and the collection alternates the big names with lesser known performers. Here’s a little taster of  more of the featured sounds… Shirley Ellis’ ‘Soul Time’, The Impressions’ ‘You’ve Been Cheating’, Jackie Lee’s ‘The Duck’ , Homer Banks’ ‘A Lot of Love’, the Capitols’ ‘Cool Jerk’, ‘Chuck Woods’ ‘Seven Days Too Long’, Willie Tee’s ‘Wakin’ Up A One Way Street’, ‘Mr Flood’s Party’s ‘Compared to What’, The World Column’s ‘So Is The Sun’ and the Showstoppers’ ‘Ain’t Nothing But A House Party’. (That one, of course, gives the album its overall title) Anyway, we could go on listing the classics, but by now you should be getting the picture!

Discs 1 and 2 in the collection focus on what we could call bona fide US soul /mod classics. Disc 3 is a little more interesting. It’s 29 tracks of what the compilers call “soul made in Britain”. This  includes things like the Brit recorded Foundation’s ‘Am I Groovin’ You’ and Wynder K Frog’s ‘I’m A Man’ but, maybe more intrudingly, soul recorded in the UK by visiting or resident American performers like Madeline Bell, Geno Washington and Ronnie Jones and US soul recorded specifically for the burgeoning Northern soul scene – like Garnett Mimms’ ‘As Long As I Have You’ and Major Lance’s ‘Right Track’. For sure this third disc also offers music from the poppier end of the soul spectrum, like Lorraine Silver’s ‘Lost Summer Love’. For me , this begs the question why Lorraine in is there and someone like Georgie Fame omitted. Just a small beef . I’m a big Georgie fan and he was a true mod/club hero but I guess you can’t have everything! Even with Loriane, this is just an excellent, memory, jerking, foot tapping collection!