AT “HOME” WITH THE GODFATHER…. 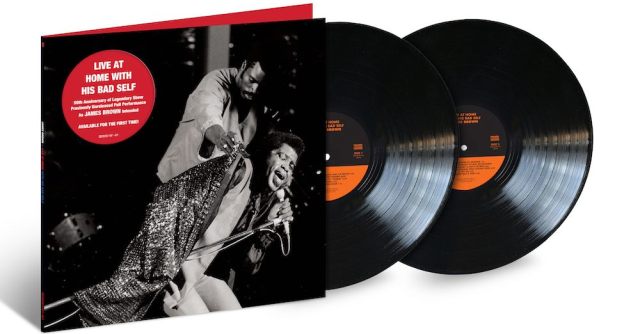 On 1 October 1969 JAMES BROWN came home to Augusta, Georgia to play what was to become one of his most talked about live shows…it was his “homecoming” after all and the famed Bell Auditorium was packed to the proverbial. Because of the show’s significance, the concert was recorded and the subsequent album was scheduled for a late 1969 release, but, for all kinds of reasons, that never happened. What actually happened was that parts of the recording were incorporated into half of JB’s ‘Sex Machine’ LP; now, though, for the first time, the whole recording is being made available on CD, 2LP vinyl, and digital audio to commemorate the 50th anniversary of the show. The audio has been newly mixed and seven of the performances have never been available in any format before. Among the newly-available material are the instrumentals ‘Lowdown Popcorn’ and ‘Spinning Wheel,’ which were re-cut with pre-recorded applause for the ‘Sex Machine’ album. ‘There Was A Time’ and ‘Mother Popcorn,’ which were heavily edited on ‘Sex Machine’, appear at twice the length. There’s also a live rendition of his 1968 hit ‘Give It Up Or Turnit A Loose,’ which appeared on ‘Sex Machine’,

JAMES BROWN; Live At Home with His Bad Self is out now.