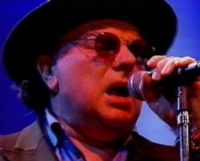 The enigmatic VAN MORRISON is set to release ‘Astral Weeks’: Live at the Hollywood Bowl’ – an in-concert reworking of his historic 1968 gold-certified solo album. Recorded live over two nights at the Hollywood Bowl last November 7th and 8th, the album marks the premiere release on MORRISON’S new EMI-distributed label, Listen To The Lion Records. The concerts marked the first time the singer ever performed ‘Astral Weeks’ in one complete concert set. Joining him was an orchestral string section and a band composed of world-class musicians, some of whom played with him on the original ‘Astral Weeks’ sessions 40 years ago. “The Hollywood Bowl concerts gave me a welcome opportunity to perform these songs the way I originally intended them to be,” says MORRISON, who, amazingly, held only one rehearsal prior to the concerts. “There are certain dynamics you can get in live recordings that you just cannot get in a studio recording. I love listening to live recordings. You get the whole thing right there, unabridged, raw and in the moment. There was a distinct alchemy happening on that stage in Hollywood. I felt it.” Both Bowl shows were filmed in high-definition, and will later be available as a commercial DVD concert film. Due to overwhelming demand, MORRISON will perform ‘Astral Weeks’ again, in a show at the Theatre at New York’s Madison Square Garden, on Friday and Saturday, February 27th & 28th. Accompanied by two different bands, VAN will play two sets per show: one of ‘Astral Weeks’ cover-to-cover, the other of rarely played Van Morrison classics.