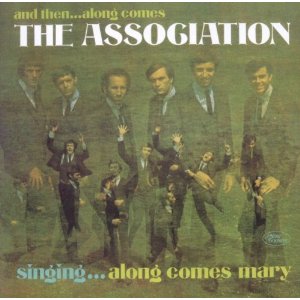 Fans of that sweet, harmonic pop-soul sound of groups like THE FIFTH DIMENSION and THE FRIENDS OF DISTINCTION need to know that over the last 12 months re-issue specialist CHERRY RED RECORDS have – through their various imprints – made available the bulk of the back catalogue of underrated West Coast harmony group, THE ASSOCIATION.

Now , THE ASSOCIATION were never a soul group. They grew out of the mid sixties California folk-rock scene and went on to score a whole series of US hits and release a slew of now collectable albums. Amongst their biggest hits were the beautiful ballads, ‘Cherish’ and ‘Never My Love’ and every soul fan will have numerous covers of those songs by artists of the calibre of THE FOUR TOPS, ETTA JAMES, SMOKEY ROBINSON and indeed the FIFTH DIMENSION whose producer, BONES HOWE, was also responsible for many of THE ASSOCIATION’S recordings.

The Now Sounds label have reissued the first four ASSOCIATION LPs – ‘And Then Along Comes The Association’, ‘Renaissance'(both 1966), ‘Insight Out'(1967) and ’68’s ‘Birthday’ while the outfit’s more exp

erimental 1972 album ‘Waterbeds In Trinidad’ is out on the Rev-O-La Label. That one features a little-known GOFFIN/KING song, ‘Snow Queen’. The other albums feature classics like ‘Cherish’, ‘Never My Love’, ‘Windy’, ‘Along Comes Mary’, ‘Time For Living’ and ‘No Fair At All’… all great and classy harmony pop from a little known group. Acquaint yourself with them @ www.cherryred.co.uk