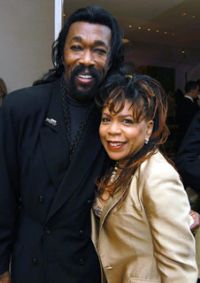 The end of January brings a plethora of goodies for fans of soul duo ASHFORD AND SIMPSON. The couple will release a definitive collection of their Greatest Hits,’ Ashford & Simpson: The Real Thing’ on CD, DVD and DVD Blu Ray (Burgundy Records / Sony Music). The first-ever live in-concert audio and video recordings are performances by the duo of the hit songs they have written for themselves as well as those made popular by other major music artists. The release date is January 27, 2009. The DVD & Blu Ray contains over 90 minutes of concert performances with 18 of the Greatest Hits filmed in HD video and surround sound digital audio. There is thirty minutes of bonus content which includes a retrospective feature from CBS Sunday Morning, an intimate at-home interview and 2 tracks from a never-before-seen concert of DR. MAYA ANGELOU and ASHFORD & SIMPSON performing together on stage. The DVD also features an exclusive premiere of four songs from ASHFORD & SIMPSON’S upcoming Broadway musical, ‘Invisible Life.’ The CD features 14 greatest hits with over 65 minutes of live performance and for those who like that sort of things there’s a link giving the consumer access to ringtones, audio & video streams, links to purchase recordings of ASHFORD & SIMPSON songs that have been recorded by other artists and never-before seen interviews.