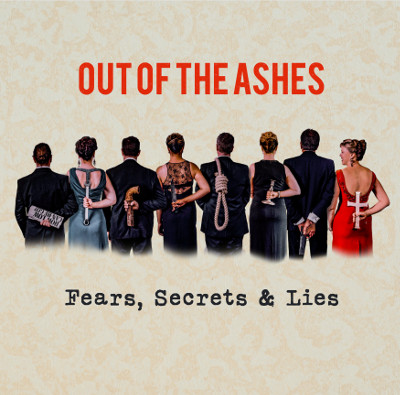 OUT OF THE ASHES are a contemporary Gospel group from deepest, darkest Gloucestershire. Fronted by husband-and-wife duo Penny Lyon and Kevin Washburn, the band has just released their third album, ‘Fears, Secrets & Lies’.

The 14 tracker is an enigmatic mix of styles… jazzy in places there’s also a sprinkle of blues, a garnish of swing and a touch of world rhythms. The overriding flavour though is blue-eyed soul. The album boasts plenty of catchy tunes, all delivered with a soulful intensity that comes from the musicality of the players and their belief and faith in the message in the music. Hear that special sound at its best on the LP’s title cut and the opening, ‘Wake Up’. Elsewhere, UK blues expert, Paul Jones adds his distinctive harmonica to a trio of cuts that are, as you’d expect, the set’s bluesiest moments. Standout cut, though, is the beautiful ballad, ‘So Silently’… simple, sweet and serene.

Out Of The Ashes’ ‘Fears, Secrets & Lies’ is out now and if you enjoy the blue-eyed-soul sounds of say, Paul Carrack, you could do worse than investigate. Do so @ www.outoftheashesmusic.uk