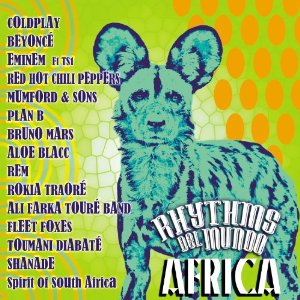 Singer/songwriter KENNY YOUNG (co-writer of ‘Under The Boardwalk’ no less) set up the musical charity ARTISTS PROJECT EARTH (APE) as a response to the dreadful tsunami of 2004. The idea was to use music to not only raise money for relief but to also heighten awareness of climate change and how it can contribute to natural disasters. He encourages musicians to allow their music to be remixed and subsequently included on compilations that are sold as the charity’s principal fundraiser.

The first album was released in 2009 under the title ‘Rhythms Del Mundo’ and APE is now delighted to release its fourth album – ‘Rhythms Del Mundo: Africa’. The set features high-profile Western and African musicians collaborating on African remixes of their contemporary hits. Featured material includes BEYONCE’S ‘I Miss You’, PLAN B’S ‘She Said’ and ALOE BLACC’S ‘I Need A Dollar’. COLDPLAY, REM, MUMFORD AND SONS and BRUNO MARS are amongst the other big name artists on the set. The music was mixed and re-recorded in Mali, Kenya, South Africa and Swaziland.

Money raised from the album will go specifically to African projects aimed at mitigating the impact of climate change and drought. You can find out more about this album, APE, its aims and the 300 or so projects it has already helped by going to www.apeuk.org