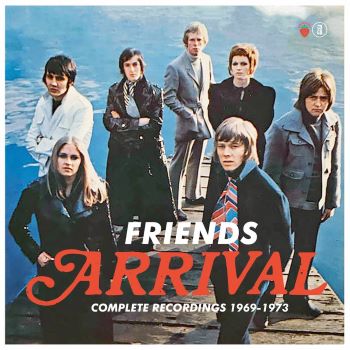 70s UK band ARRIVAL were never a soul outfit but their work often had a soulful edge – in places a little like the Fifth Dimension; elsewhere reminiscent of Rotary Connection. Remember too that Arrival evolved out of a Liverpool soul band, The Excelles and when Arrival folded various members went on to work with bands like Kokomo, the Olympic Runners and Gonzalez… all proto blue-eyed soul bands, long before the term was coined.

If you’re intrigued, Cherry Red subsidiary label Strawberry has just released a three CD mini box set that contains 43 tracks – everything, it’s believed, that Arrival recorded in their short(ish) career, 1969 – 1973. There’s material from their Decca and CBS periods as well as live material from BBC sessions  which has never been previously released.

The collection is called ‘Friends’ named for their  biggest hit. Pop anoraks will know that the catchy tune reached no. 7 on the UK charts in 1970. Like their other hit, ‘I Will Survive’ (from the same year) the song featured the magnificent voice of Scouse songbird  Dyan Birch supported by soaring vocal harmonies – reminiscent, as we’ve said, of the Fifth Dimension . And like that band, Arrival had a soft spot for Jimmy Webb songs. Featured here is a lovely version of his ‘(Let My Life Be Your) Love Song’ – once again that lovey Birch voice, sweet harmonies and full-on production.

Other highlights in the collection include versions of the Doors’ ‘Light My Fire’, Stevie’s ‘He’s Mistra Know It All’ and Aretha’s ‘Prove It’.

The  collection includes informative sleeve notes from long-time fan Austin Powell and plenty of archive pix and, as importantly, it’s all been put together with the support and input of surviving band members.