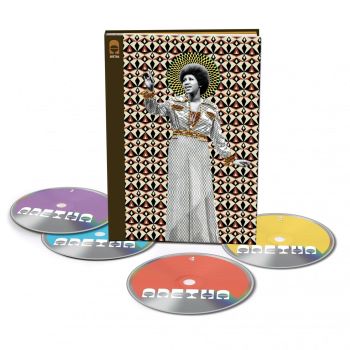 Hard to believe but it’s just over two years since ARETHA FRANKLIN died. Interestingly, knowing the ways of the music biz marketeers, there haven’t been too many retrospectives, reissues or tributes to the Queen. It seems that the business is treating Aretha, her music and her memory with the respect they all deserve.

Box set brand leader RHINO RECORDS have now, with some justification, decided that the time is right for a comprehensive but respectful overview of Ms Franklin’s work. So, on November 20th, they will be releasing ‘ARETHA’, a 4-CD and digital collection with 81 Tracks, including 19 previously unreleased alternate versions, demos, rarities and special live performances spanning an almost 60-year career. There will also be a 2 LP and single CD version featuring highlights from the main box,

The collection, arranged in mostly chronological order, seeks to put Franklin’s life and career into perspective; thus  the collection is accompanied by liner notes written by Rochelle Riley, author and director of arts and culture for the City of Detroit, and David Nathan, a music journalist and soul historian who interviewed Franklin more times than any other living writer.

The majority of ‘Aretha’ is naturally dedicated to her tenure with Atlantic Records between 1967 and 1979, which included five consecutive #1 R&B albums. In fact, the first two unreleased songs on the collection – ‘My Kind Of Town (Detroit Is)’ and ‘Try A Little Tenderness’ – are home demos that she recorded in 1966 to give Atlantic executive and producer Jerry Wexler an idea of possible material for her debut LP for label. There’s also material from Aretha’s pre and post Atlantic career. That previously unreleased 1966 home demo of ‘My Kind Of Town (Detroit Is)’ is available from today, 2nd October, as a taster for the box set