ARETHA TO DUET WITH CONDOLEEZZA 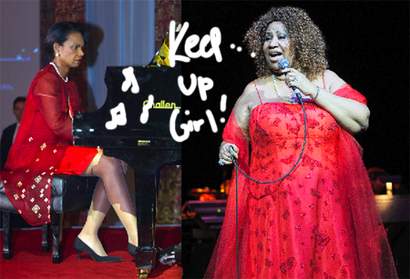 In what, on paper at least, appears to be an odd pairing – ARETHA FRANKLIN is to play a live concert with former US Secretary of State, CONDOLEEZZA RICE. The pair will be getting together in Philadelphia on July 27 for a charity concert in aid of an Inner City Children’s Charity. RICE , apart from her politics, is a celebrated classical pianist (she’s played for the Queen at Buckingham Palace, no less) and at the Philly concert the pair will team up for a selection of operatic arias and versions of ‘Natural Woman’ and ‘I Say A Little Prayer’. ARETHA (now 68) is putting aside any political differences, “Ms Rice is a consummate classical pianist and since I sing the arias, I thought we could do something bipartisan for our favourite charities.”