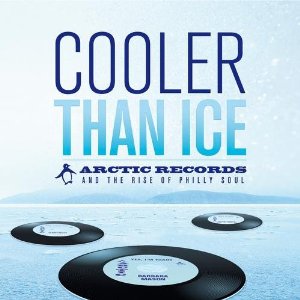 JIMMY BISHOP’S Arctic Records was Philadelphia’s most important pre-Philly International label. BISHOP was one of Philadelphia’s most-listened to 60s Djs and as programme director of WDAS-AM he wielded enormous influence over the air waves of the City Of Brotherly Love. Not content with just breaking hits though BISHOP decided in 1964 he’d like to make them… so he set up Arctic Records.

In getting into the music making business JIMMY had invaluable support from ex-LARKS vocalist, WELDON A MCDOUGAL III. WELDON had a share in Philadelphia’s Harthon Records and, ever a shrewd operator, he knew the value of having a top radio man on board. The pair produced a number of records that were leased out to other labels but in September ’64 BISHOP dumped McDOUGALL and launched his own imprint – Arctic, named in a tribute to his respect for another “ocean” label, Atlantic Records. Importantly, he also tied up a deal with HARRY LIPSIUS of Jamie Records to secure the all-important distribution rights

BISHOP’S new label hit pay dirt with their fifth single – BARBARA MASON’S ‘Yes I’m Ready’ – a classic soft soul tune that pointed to the future of the Philly sound. That hit and BISHOP’S status in the tight-knit Philly music world meant all the city’s best musicians and artists wanted to work with him. The legendary BOBBY MARTIN came in as Arctic’s primary arranger while young Turks like NORMAN HARRIS, RONNIE BAKER and EARL HARRIS also came into the Arctic fold along with session men BOBBY ELI, EARL YOUNG and VINCE MONTANA. Amongst the Arctic crowd too were two hopeful, young musicians – keyboardist LEON HUFF and aspiring singer KENNY GAMBLE.

GAMBLE got to record a number of singles for Arctic – both as a soloist and out front as lead singer with THE FLOATERS and THE ROMEOS and you can enjoy all of his Arctic work on a fabulous new 6 CD box set that brings together every single released on JIMMY BISHOP’S label. The set boasts 121 cuts and the featured artists include THE VOLCANOES, HAROLD MELVIN and the BLUE NOTES, HONEY and the BEES, THE AMBASSADORS, WINFIELD PARKER, DELLA HUMPHREYS and, of course, BARBARA MASON and KENNY GAMBLE. Philly collectors will revel in stuff like ‘Happiest Girl In The World’ from THE TIFFANYS and ‘Girl I Love You ‘ from THE TEMPTONES who featured a young DARYL HALL (then using his real name, DARYL HOHL).

Want more? Well, the lavish pack also contains half a dozen vinyl 7″ singles which feature 12 previously unissued recordings . They include BARBARA MASON’S ‘He’s Got To Love Me ‘and KENNY GAMBLE’S ‘It Takes Two’. Add to all that loads and loads of archive photos and full track commentary and you have a five star retrospective of a wonderful old label – a label that paved the way for the magic of Philadelphia International.. . a label that helped define sweet soul.

COOLER THAN ICE – ARCTIC RECORDS AND THE RISE OF PHILLY SOUL is out now on Arctic/Jamie-Guyden.