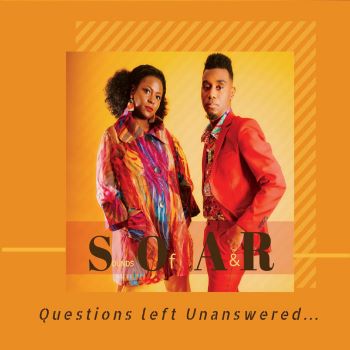 Vocalist April May Webb and horn player Randall Haywood comprise the jazz duo SOUNDS OF A&R… or as they prefer, S.O.A.R. Life partners as well as musical compatriots, the pair have been regulars on New York’s jazz scene for quite some time, playing prestigious venues like Dizzy’s, The Lincoln Centre, Birdland and the legendary Apollo.

S.O.A.R. have just released their third studio album, ‘Questions Left Unanswered’, which they describe as an amalgam of original compositions and cover arrangements of time-tested classics. An accurate description for sure but what they should add is that their arrangements of those well-known songs are both imaginative and innovative, rightly (as classic covers should be, I think) moving well away for the original template.

The most familiar songs on view are Dolly Parton’s ‘Jolene’ and the Gimbel/Fox evergreen ‘Killing Me Softly’. Both are totally reimagined and bear witness to the adage that a good song is just that – no matter how it’s presented. On both, Ms Webb’s light vocal caresses, the lyric while Haywood’s horn lines echo and enhance her delivery. The other covers include a treatment of Martin Nystrom’s modern hymn ‘As The Deer’, the Kern/Mercer classic ‘I’m Old Fashioned’ and Gigi Gryce’s ‘Social Call’ which was made famous by Jon Hendricks and on that latter Webb shows her mastery of the art of Hendricks style vocalese – a skill repeated throughout the long player.

The original songs like ‘They Keep Saying No’, ‘The Skin I’m In’, ‘Dark Brown Eyes’ and the title cut speak of contemporary issues without being heavily didactic while the opening track, the spoken ‘Thus The Beginning’, explains the genesis of S.O.A.R.