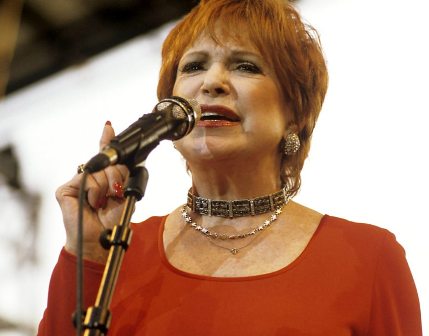 Born Annabelle Allan Short in London in 19030 her family relocated to New York when she was just four. In America she became something of a child singing star. After school she changed her name to Annie Ross and returned temporality to the UK – subsequently dividing her time between the States and England.

In 1952 she won Downbeat magazine’s “new star” award for her song ‘Twisted’ a “vocalese” treatment of a tune by sax man Wardell Gray. That approach – matching vocal lines with an improvised jazz solo – brought Ms Ross to the attention of singers Dave Lambert and Jon Hendricks, and they subsequently formed an acclaimed, award winning vocal trio… Hendricks, Lambert and Ross. The group recorded seven albums but Ross quit in 1962 and two years later opened a club in London… Annie’s Room which hosted many big jazz names during its existence.  She recorded solo albums and also enjoyed a parallel career as an actor with maybe her most intriguing job being the voice of Brit Ekland in the cult ‘Wicker Man’ movie.

Ross led an often turbulent personal life; she suffered addiction, relationship and monetary problems but her jazz achievements were never doubted. She was rewarded with numerous honours including in 2010 becoming an NEA Jazz Master – the highest award in American jazz.