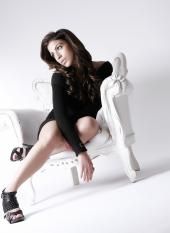 New UK soul artist ANGEL hails from London and she’s worked around the capital’s music venues for the last seven years or so… even appearing at the prestigious Palladium. ANGEL’S currently working on her debut album – ‘Angel’s Vibes’ but in the meantime she’s just released her first single – a mighty slab of Brit soul called ‘There’s a Girl’. Prefaced by a catchy piano figure, it’s a sweet and reflective ballad that owes a something to the current sound though it’s steeped in old soul sensitivities too. The single is available from the usual download outlets and for more info go to www.myspace.com/angelconstantine . You can catch her live at London’s Willow Bar on 6 May and at the Cobden Club on 20 May.