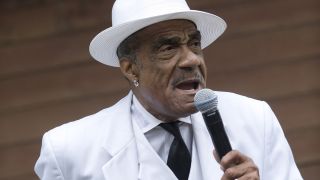 Soul veteran ANDRE WILLIAMS died on Sunday 17th March in Chicago. He was 82 and it’s reported that he had been suffering with colon cancer. His manager said: “It is with great sadness that we announce the passing of legendary artist Andre Williams. He was diagnosed two weeks ago with colon cancer that spread to his lungs and brain. After that his body started shutting down pretty quickly”.

Zephire “Andre” Williams was born in Bessemer, Alabama in 1936 but after relocation to Detroit he became part of that city’s 50s and 60s musical renaissance. His first pro group was The Five Dollars who morphed into Andre Williams and the Don Juans. The band scored hits like ‘Bacon Fat’ which featured Williams’ unusual “sing-talking style”. He joined Motown in the early 60s but failed to enjoy any real success despite writing songs for Stevie Wonder and the Temptations. Moonlighting from Gordy he wrote and produced the hit ‘Twine Time’ for Alvin Cash but his most successful spell was at Chess where in the mid 60s he scored with things like ‘The Stroke’ and ‘Cadillac Jack’.

Williams went onto work sessions with people as varied as Mary Wells and Parliament – even, eventually, the Red Hot Chilli Peppers. He worked constantly and in the 90s his music and style (he was a flamboyant dresser and performer and was prepared to try almost any genre) won a new audience. In 1998 he released an album to satisfy this new demand. ‘Silky’ saw Williams backed by garage rock band The Gories who added punk flavours to his old school soul! His, next album, ‘Red Dirt’, however embraced country flavours. He continued to record and perform through the noughties and his last album was 2016’s ‘Don’t Ever Give Up.’ Always outspoken and colourful, in 2012, Williams was eventually inducted into the Michigan Rock and Roll Legends Hall of Fame