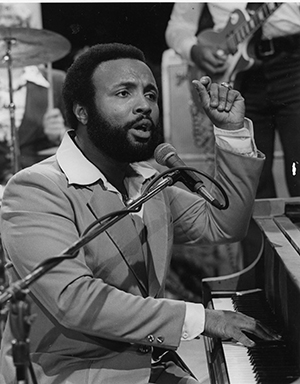 Gospel superstar, ANDRAE CROUCH died on Thursday, 8th January. He was 72. Agencies report that the singer died at Northridge Hospital Medical Centre, where he had been admitted last Saturday after suffering a heart attack. His twin sister, Sandra said, “Today my twin brother, womb-mate and best friend went home to be with the Lord. I tried to keep him here but God loved him best.”

Born in San Francisco, Crouch began his music career in his teens, writing his first songs aged just 14. Then in the 60s and 70s along with people like Rev. Walter Hawkins and Rev. James Cleveland, Crouch helped modernize gospel music by bridging the traditional Black gospel sound with the white contemporary Christian music of the times. To many Gospel musicians, Crouch is simply considered the “Father of Modern Gospel Music.”

With his group, The Disciples, Crouch fronted countless Gospel hits and simultaneously worked with artists across a variety of genres – most notably Michael Jackson, Madonna, Elvis Presley, Paul Simon, Diana Ross, Ringo Starr, Chaka Khan, Shelia E., Take 6, Kim Burrell and Marvin Winans. More specifically the Disciples sang BVs on Madonna’s ‘Like A Prayer’ while Crouch arranged Jackson’s ‘Man In The Mirror’. In 1985 he was nominated for a Grammy for his music to the movie ‘The Colour Purple’ and he’s one of only a handful of gospel performers to have a star on the Hollywood Walk of Fame.

Interestingly, Crouch’s fame came despite a lifelong struggle with dyslexia. To create music, he would make drawings that allowed him to grasp the overall concept. For the Jackson song, for instance, we’re told that he drew a mirror with an image in it.

Crouch had health issues in recent years, including diabetes and cancer. Last month, he was hospitalized for pneumonia and congestive heart failure and had to cancel a tour.