AND IN THE BLUE CORNER… 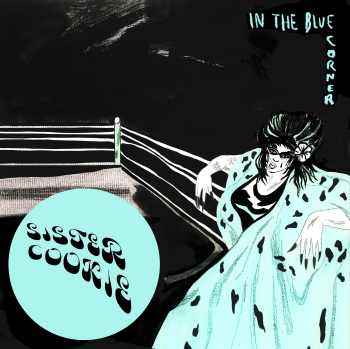 SISTER COOKIE (real name Fanen Jukwey) is a Lagos-born, London-based blues and soul  singer who’s become a popular  fixture on the European festival circuit. The pandemic of course put an end to her regular gigging, so Ms Cookie did what many artists did and set to work on an album project.

Said album, ‘In The Blue Corner’ has just been released and its easy to hear why the lady’s been a popular live attraction. Her music’s big and brash; bold and bluesy. We tasted what she was capable of last year when she released a taster single, ‘(You’re Never More Than) Seven Feet Away’. She never did say what we’re never more than seven feet away from but that’s immaterial – the tune was all about impact.  There was a lot going on – wailing tenor sax, punchy guitar chords, booming  double bass and a rolling barrel-house piano – but the star was indeed is the “for real” vocals of Sister C.

On the now-released album, there’s plenty more of the same. Like the opener, ‘Can’t Get It When You Want It’ – shades of Daptone. Best of the beaters is the rough and tough ‘Ain’t No Good (But It’sGood Enough For Me). Here the flavour is Etta James meets Northern soul.

The album offer some down moments too. ‘Night After Night’ channels a southern country meets soul sound but the big ones are the ballads, especially ‘Nothing Left To Do But Cry’ which reminds me a lot of those classic Bobby Bland Duke recordings. (No coincidence that one of the singer’s go-to songs is ‘St James Infirmary’ – a classic in the Bland repertoire.)

‘In The Blue Corner’ has been produced by Alex McGowan and he and Fanen have put together a really tight band (Rob Tyler (drums), Alex Bland (sax), Pete Farrugia (guitar) & Phil Bloomberg (bass)) to offer authentic support throughout. Little wonder the album is already being championed by people like Craig Charles, Robert Elms, Mark Radcliffe and Jazz FM.

Oh, by the way, that “Sister Cookie” name? It seems it was bestowed on her during an altercation with a Nazi skinhead in a Camden pub! She’s one tough “cookie” – ditto, her music.

SISTER COOKIE: In The Blue Corner’ out now via the Liquid label.