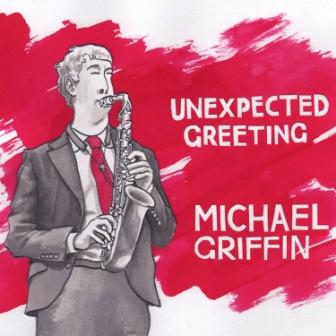 MICHAEL GRIFFIN is one of Australia’s top jazz saxophonists. He’s played all the top venues in and around his Sydney base and he’s performed with people like Joe Lovano and John Scofield. In 2013 Michael was a semi-finalist at the Thelonious Monk International Saxophone competition in Washington D.C. There he hooked up with some of the biggest names in contemporary jazz – people like Herbie Hancock, Wayne Shorter, Jimmy Heath, Branford Marsalis, Bobby Watson, Roy Hargrove, Kurt Elling and Marcus Miller.

You can hear what The Michael Griffin Quintet have to offer on their debut album, ‘Unexpected Greeting. Recorded back in 2011, the long player’s being re-promoted and investigation will reveal a rewarding 10 tracker made up of six Griffin originals and four covers snaffled from the great American songbook. Those tunes are ‘Embraceable You’, ‘Almost Like Being In Love’, ‘I Didn’t Know What Time It Was’ and ‘As Time Goes By’. Those last three are vocals featuring Briana Cowlishaw and she treats the task respectfully… letting the quality of the music do the hard work.

Of the Griffin originals the busy ‘Hotel Hollywood’ harks back to jazz’s golden age, making a striking opening cut. ‘Flair’ is fast and furious allowing the band to show what they can do while the treatment of the aforementioned ‘Embraceable You’ is the album’s late night, dinner jazz set piece.

The set’s oddity (in both title and soundscape) is a catchy, riff-laden ‘Shut The Funk Up’. It’s not the sweat and grind funk of James Brown, rather the smoother, yet tough edged flavour of the Crusaders… an interesting track.