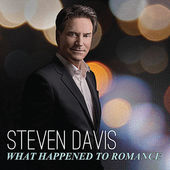 ‘Whatever Happened To Romance’ is the title of the latest album from Nashville-based jazz crooner STEVEN DAVIS. The swinging 14 tracker is an affirmation that romance is always in vogue and sonically the set has its roots in the era of the great American songbook…. though of the 14 songs, only two are actually from that era. The rest, penned by Davis and his producers Josh Charles and Alissa Moreno (collectively “The 88s”), are all originals but their template was clearly the music of Gershwin, Porter, Mercer, Cahn et al.

To record the album Davis relocated to New York to work with the After Midnight Orchestra – a big band made up of veterans of the Count Basie and Duke Ellington Orchestras.

Amongst the highlights are the opening, ‘Love Comes Right On Time’ which swings like Sinatra’s ‘Saturday Night Is The Loneliest Night Of The Week’ and the more unusual ‘Perfectly Perfect’ which had been used in a TV commercial for a German mobile phone app!

The two non-original songs are Irving Berlin’s ‘All By Myself’ and Johnny Mercer’s ‘Day In Day Out’ and, as you’d expect, Davis and his team treat them with the utmost respect. Such is the quality of the original songs that there’s no visible (should that be audible?) hiatus between them and those venerable chestnuts.

Davis says of this album: “We are using the template of the Great American songbook writers to create new music that hopefully will stand the test of time. I love this music because it allows us to tell these stories and I like the nuances of this style”.

Find out more about Steven Davis and ‘What Happened To Romance’ @ www.StevenDavisMusic.com