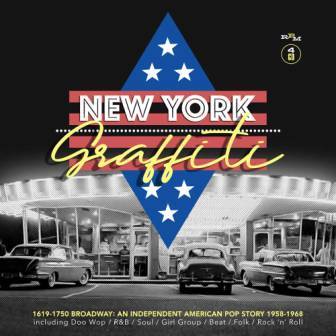 ‘American Graffiti’ is the title of a classic George Lucas movie that focused on coming of age stories in the late 50s and early 60s and the soundtrack reflected what, to many was (indeed is) a Golden Age of American pop music. ‘NEW YORK GRAFFITI’ is the title of a wonderful new 4 Cd, 107 track compilation from Cherry Red’s RPM imprint that covers much the same period but comes at things from a slightly different angle.

Subtitled ‘1619 – 1750 Broadway… an Independent American Pop Story 1958-1968’, the collection focuses on the pop music created around that part of Broadway that centred on the legendary Brill Building. More specifically it looks at the records that came out of the plethora of independent song publishers and small record labels that eventually came under the control of Edward (Ed) Kassner and what was to become his President label/publishing conglomerate.

Don’t expect too many big names here nor too many smash hits; but that doesn’t take anything away from the quality, intrigue and relevance of the music. Indeed it makes the whole package that much more important for collectors.

“Big” names… well yes… not too many. But take a listen to the cuts from “Neil and Jack” and you’ll hear the familiar tones of a certain Neil Diamond! While soul anoraks will know that the album’s Shirley Elliston became Shirley Ellis while Doris Willingham whose beaty ‘You Can’t Do That’ closes the collection was soon to morph into deep soul queen Doris Duke! Elsewhere there are cuts from Richard “Some Other Guy” Barrett and Bobby “Montego Bay” Bloom while he was with The Imaginations.

The music is offered chronologically and ranges from doo-wop through to early soul and from novelty songs to classic 60s pop…with lots of other flavours in the mix too. The biggest hit here is Marcie Blane’s ‘Bobby’s Girl’ (covered in the UK by Susan Maughan) but you can also hear a version of ‘Prisoner Of Love’ (from Billy Duke) cut long before James Brown’s take and plenty more (like Bobby Sherman’s ‘Do You Wanna Dance’) that will set bells ringing. Interestingly, seeing as how in the 50s and early 60s UK singers aped their US counterparts, ‘NEW YORK GRAFFITI’ offers plenty of mid 60s US beat groups (like the Druids and the Barbarians) doing their hardest to copy the Merseybeat sound!

The box comes beautifully packaged and has a full essay and extensive recording information and archive pix…. a great Christmas present for any serious music collector!